The Moon is the first celestial body that you can reach by using a Tier 1 Rocket. Its surface consists of grayish blocks and is quite flat and bombarded with craters. As you walk on the surface footprints are left behind. Meteors may fall on the Moon.

The moon is uninhabitable by Overworld creatures due to the lack of Oxygen. On the other hand, alien forms of hostile mobs can spawn in the dark and you can find Moon Villages, an alien version of Overworld villages.

The Moon dimension number is -28.

The Moon can be reached with the use of a Tier 1 Rockets, which can be built at the NASA Workbench. Rockets of higher tiers can be used, but they are more expensive. 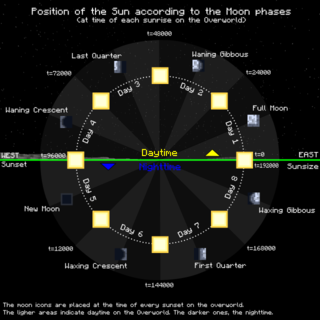 The day-night cycle according to the Moon phases seen on the Overworld.

NOTE: Since May 2017, the Moon (and the other dimensions) no longer follows the moon phases seen on the Overworld. See details on GitHub.

Since the 1st Overworld night is full moon, you can have a safer landing within the 1st 4 Overworld days, and then the next 4 Overworld days are more dangerous since hostile mobs will be able to spawn in the dark, and so on. If you miss the counting, the moon phases can tell you when it is daytime or nighttime on the moon.

During the nighttime, the environment light levels go very low, allowing hostile mobs to spawn on the surface.

The Overworld seems to be always fixed high up in the sky and only the Sun moves as the time passes by, but this is not entirely true. In fact the Overworld does move not because of the time but if the player travels away from the Moon's equator line (z = 0).

For Command blocks and OP/server admins:

Moon topography (the brighter, the higher).

The surface of the moon is formed by craters and is covered by Moon Turf. Underneath it there is Moon Dirt, and underneath that you will find Moon Stone. In the lower levels caves with Moon Copper Ore, Moon Tin Ore and Cheese Ore will generate. The moon has no naturally occurring lava.

Sometimes you may also find Fallen Meteors on the surface of the moon.

You can also find man-made holes, which are the entrance to Moon Dungeons.

The only passive entity that spawns natively and lives on the moon is the Moon Villager. Unlike normal villagers, they cannot trade, and only walk around in their Moon Villages.

The Moon's boss is the Evolved Skeleton Boss, which is found in the Moon Dungeons.