Difference between revisions of "Gas Liquefier" 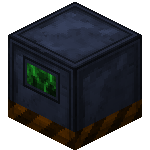 The Gas Liquefier is a new machine added from Galacticraft 3. Its function is to transform gases into liquids by cryogenic cooling - for example, oxygen can be turned into Liquid Oxygen.

When supplied with Methane Gas, it transforms it into a special liquid form: rocket fuel! Used with a Water Electrolyzer and a Methane Synthesizer, that can make unlimited Fuel automatically from water plus a source of carbon: see Methane Synthesizer for more information.

It is a Tier 2 Machine so it receives a speed buff when powered with Tier 2 power.

The Gas Liquefier accepts gases into its gas tank in three different ways:

(Future planets will have different atmospheres.)

When powered, the Gas Liquefier will gradually convert whichever gas is in its input tank, into a liquid in its output tanks. If converting atmospheric gases, two output tanks may be used.

Liquids can be removed from the output tanks in three different ways:

As well as Methane Gas Canisters, the Gas Liquefier can accept canisters of liquefied gas (for example, Liquid Oxygen) in its input slot. Using a liquefied gas canister in the input slot will turn its liquid contents back into gas in the input gas tank, ready for the machine to liquefy it again. That might be useful, for example, to have two half-filled liquid canisters make one full canister.

Make sure to get the

Oxygen Compressor   the right way around in the recipe!!