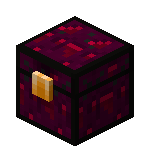 The Treasure Chest (also Tier 1 Treasure Chest) is a special chest found in the last room of the Moon Dungeons. It always contains valuable loot and specially schematics for rockets and Moon Buggy, which are found only in these chests.

To open the Treasure Chest you will need a Tier 1 Dungeon Key which is obtained by defeating the Evolved Skeleton Boss.

The chest loot is generated on boss death, so it is impossible to get the loot without defeating the boss.

Pro tip: If you're not seeing the boss monster in the dungeon, check that your game is not on Peaceful mode, and check that another player didn't kill the boss in that dungeon in the past 15 minutes.

The loot generation is random: you can generate the same world and defeat the same boss but the loot will likely be different.

The chest will contain a schematic: either the Tier 2 rocket schematic or the Moon Buggy schematic, randomly. (If you have add-on mods installed, they may also add their own schematics here.)

The chest may also other treasure items, for example:

The Treasure Chest cannot be mined with a pickaxe, pushed by a piston and is not obtainable by normal means unless in creative mode or by /give command. Even if you obtain one in creative mode and place it, it will be empty.

It has a large version like the double chest from vanilla if two treasure chests are manually placed adjacent to each other.

In Galacticraft 2, a Treasure Chest can be "violated" by exploding a TNT next to it. The chest will be destroyed; however, it will drop all its loot only if the respective boss was killed. (In Galacticraft 3, treasure chests cannot be destroyed using TNT, however larger explosives from other mods might have a chance of destroying them.)

All treasure chests will contain a type of Schematic if the boss was killed, normally there are two possible schematics (e.g. Tier 2 Rocket Schematic and Moon Buggy Schematic and a 50% chance of receiving each), but this can change if Galacticraft add-ons are present.