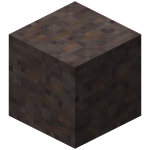 Venus Hard Rock is a block that generates naturally on Venus. It is the most common block below Venus' surface.

It can be considered the equivalent of Stone on The Overworld.

Venus Hard Rock can be mined using any pickaxe: it drops the same block when mined (there is no cobblestone on Venus). If mined without a pickaxe, it will drop nothing.

It has no significant uses. It can be used as a basic building material, it has moderate blast resistance.