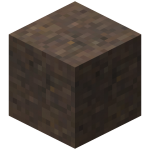 Venus Soft Rock is a block that generates naturally on Venus. It covers much of Venus' surface.

It can be considered the equivalent of Dirt on The Overworld but it is sterile due to the very high heat and acidity on Venus - nothing can grow in it.

Venus Soft Rock can be mined using any pickaxe. If mined without a pickaxe, it will drop nothing.

It has no significant uses. It can be used as a basic building material, it has moderate blast resistance.