Galacticraft is all about exploring other planets, moons and asteroids!

Each planet, moon and asteroid belt is a dimension in the game. The same goes for space stations.

Basic specs about the dimensions: 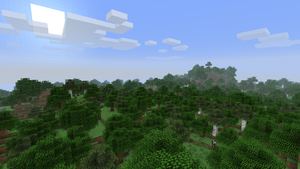 This one you know all about already. This is the old and good earthly-like dimension where the game always starts.

Here is where you will spend your first period of time in the game gathering resources to built your first rocket, your life support equipment and other essential items to start your travels in space. Don't forget to check the Pre-flight Checklist.

By the way, did you know that you can make your own Space Station to orbit it? 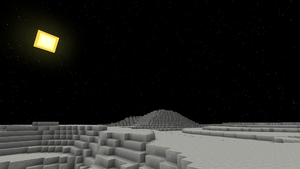 The Moon is made of Moon Rock with traces of cheese. Its surface is covered in craters from aeons of impacts by meteors.

It is reachable with a Tier 1 Rocket.

Some things to do on the Moon:

Meteoric Iron is used to make several things including the Arc Lamp, the brightest light source in Minecraft!

Pro Tip: To travel between a Moon base and an Overworld base, make a rocket pad at each base and set up a Launch Controller on each pad. Now you can launch and land in the same rocket - it's faster than using a Lander each time. You will have to think about refuelling arrangements of course. 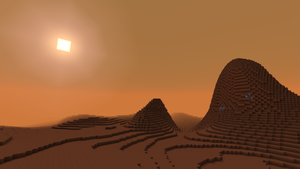 Mars is made of various kinds of red rock. The atmosphere is a dusty orange color, and the sun is a little dimmer than on the Overworld. It gets very cold at night, so make sure to wear Thermal Padding.

Mars is reachable with a Tier 2 Rocket.

If you spend some time on the surface, you will likely come across some Slimeling Eggs. Break them to hatch a friendly little critter which makes an excellent pet. You can grow it into a strong fighter; fit it with a bag and it will carry stuff for you; and adult slimelings can breed to make babies of new colors.

But the real wealth of Mars is underground. Here you will find:

Armor made from Desh has a unique knockback reduction ability - very useful in a fight!

Pro Tip: Mars is a great place to set up an automatic fuel production factory, using the Methane Synthesizer and Gas Liquefier. 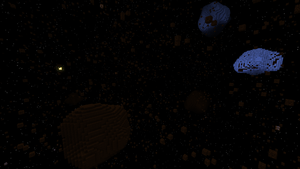 The Asteroids is a very different kind of dimension, filled with large and small asteroids. There is microgravity so you will need to figure out a safe way to move between them, or risk an endless fall!

You will need a Tier 3 Rocket to reach the Asteroids. It's a little further from the sun so there's not so much light as you are maybe used to: it's a good idea to bring a powerful light source with you. It's also cold in deep space: Thermal Padding is essential.

If you spend some time in the Asteroids dimension, you will discover that it's a miner's paradise. Around one third of the asteroids have a solid core of mineable minerals. This includes a new ore, Ilmenite - you can make Titanium from it.

The Astro Miner can automate your asteroid mining: it automatically finds nearby asteroids, flies to them, mines out their cores, and brings back what it finds to its base.

Titanium is used to make the Titanium Sword, the most powerful weapon in Galacticraft, and also the Short Range Telepad, Beam Receivers and Beam Reflectors, and Walkways.

Pro Tip: The Grapple can help you move around this dimension. Once you get some Titanium you can make Short Range Telepads to travel between two Asteroid bases. 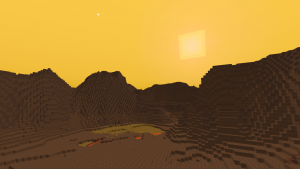 Venus is the 4th and latest dimension to be added in Galacticraft 4. It is a Nether-like place with steep mountains, vapor, lava and lots of dangers.

The sky is very cloudy with constant lightning storm. There's no rain or snowfall. The atmosphere is very poisonous and corrosive. The days are very long: about 10 hours (30 Overworld days). To generate energy, use Geothermal Generators.

The landscape offers a variety of terrain formations and biomes with tall and sharp mountains, plains and valleys with lava pools. Watch out for Sulphuric Acid pockets. 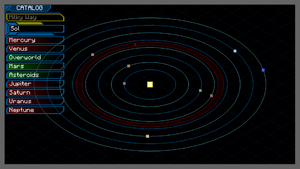 The Planet Selection Screen with all planets.

But these cannot yet be reached in Galacticraft and will show up red in the planet selection screen. They are included in the game because we have future plans for them. For now, you will just have to enjoy the way they look, and wonder ...

Please do not ask the developers "when will these new planets be in the game?" Be patient, they will come some day!

Meanwhile you can maybe find a Galacticraft Add-On which adds new planets, or come give us your ideas for them in the suggestions area of the forum.

Each dimension has properties that control how the dimension behaves and affects the player and other entities. Some of these properties can be seen in-game in the Planet Selection Screen.

These are the dimension properties: