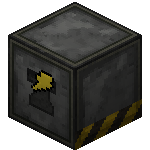 The Electric Compressor, also known as Electric Ingot Compressor, is a Tier 2 machine block that is used to compress different kinds of ingots and convert them into compressed metal sheets and platings.

It has the same use as the non-electric Compressor. Its advantage is that it is not necessary to use coal or wood to power it. Instead it has to be powered with energy.

In Galacticraft 3, tThe speed depends on the energy tier:

Electric Compressor will drop as an item when broken with any tool or by hand, but a pickaxe is the fastest way to break it.

Currently it is used to make: 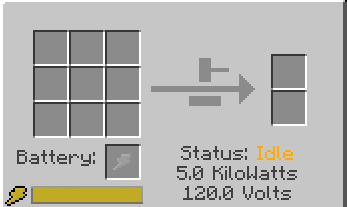 The machine can be rotated with a Standard Wrench.

In all versions of Galacticraft, the output slots of the Electric Compressor are accessible from below - for example, place a Hopper beneath it to move its output into a chest (or use another mod with item-moving pipes).

In Galacticraft 2, the input slots (crafting grid) can be accessed from the top side of the Electric Compressor. But because it is a crafting grid, except for the simplest compressor recipes (e.g. Meteoric Iron Ingot -> Compressed Meteoric Iron) you will likely only be able to automate it if using another mod which can place recipe items precisely in a crafting grid, for example Logistics Pipes.

In Galacticraft 3 and Galacticraft 4, the input slots are accessed from all 5 sides except the base. The output slot is accessed from the base. And smarter automation has been added to this machine so that can be automated in most situations even if using 'dumb' inputs like Hoppers or Buildcraft pipes. It works like this - we will talk in terms of vanilla Hoppers here, but the same things apply to item pipes.

(In Galacticraft 3, you'd need to be using version from 3.0.12.477 or later to have the functionality described. Up to Galacticraft version 3.0.12.476 the Electric Compressor could not auto-craft a shaped recipe like Tier 1 Heavy-Duty Plate, unless you first created the recipe manually - even in those early versions, automation could keep an existing recipe topped up with ingredients.)